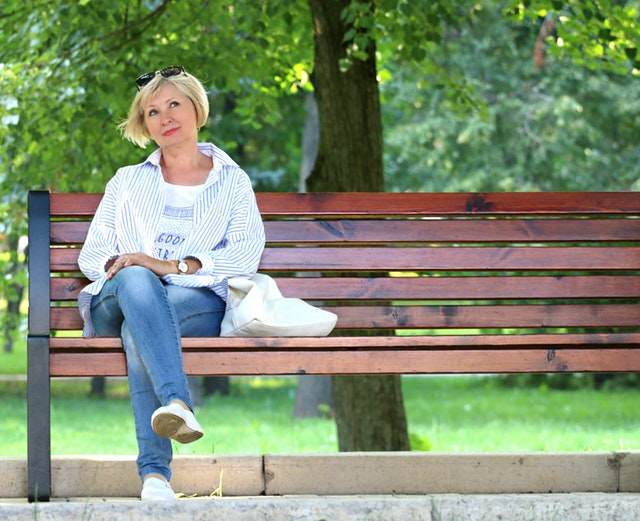 My mother was in her late forties when she called one day: “I have some sad news. Kareem died.” “I’m sorry to hear that,” I said, “How old was he?” “He was young. Only seventy-seven,” she sighed, causing me to wonder if that was, perhaps, when she, and the world, started to Redefine: Old?

Old, in my grandfather’s village, were the women bent over (their bones have termites, people used to say before we had ever heard of osteoporosis and arthritis), shuffling around, situated on the mastabeh (front porch), chucking corn, peeling pomegranates, shelling peas, stringing beans, mending a sock, gabbing with another old friend who had dropped by, while the men, some equally stooped, walking with the help of their canes, or leaning on a child, or grandchild and going to play a round of Tawla (much like backgammon, different board) or Tarnib (a card game resembling Whist), or sipping their coffee on the street corner, or perched at another old friend’s mastabeh. They certainly looked old at sixty, what with weathering the elements in the fields for decades; very old at seventy; withered by eighty. No more – at least, generally, and amongst people of our modern world where Old has been Redefined.

My friend Randa, almost 90, dressed to the nines, made-up with her red lipstick and perfect salon hairdo – a bit forgetful about certain things, at certain times – tells me: I’m having too much fun and am too busy to die. She has definitely Redefined Old with her snazzy style and sassy attitude!

My other friend, Itaf, at 80 and equally fashionable, who was widowed three years ago tells me: Freedom is precious, and I’m savoring every bit of it! She, like myself and many women of that era, went straight from our father’s homes to our husband’s. Freedom was a Stranger to some of our generation. She, too, has Redefined Old with her vitality!

Anne, at 65 moved her Dad, almost 90, to an Assisted Living Facility and tells me that she packed his small bag of clothes, toiletries, a few books and a small collection of family pictures with which to decorate his new accommodations. Isn’t it sad, she says, that this once very active man who served in the military, worked hard and provided for his family, is now reduced to a small bag and a few memories in an unfamiliar room? And is that when one would be pigeonholed as Old, I wonder?

My daughter, on her way to a doctor’s appointment, sees an older man standing in the small hallway where the facilities are, looking distraught while saying: Please help. My wife is in there and she needs help and I can’t go in to the Women’s to assist her. My daughter goes in and hears the frail-voiced woman saying: I’m okay. I’m okay. I found the toilet paper. The poor man, was totally panicked until he realized that she was alright! Moments like these remind me that no matter how peppy I may feel at this age, Old has a way of swooping down on us in one nano-second!

My friend, Alia, is around 79 and a stylish, active woman who always has something to do and places to go. During one of our many regular chats over the phone she laughingly tells me: my parents and family on both sides lived well into their nineties, so my children tell me that I am not allowed to die any time soon. Sadly, Alia had a stroke and passed away about a month later which proves to me that we can all Redefine Old with our attitude, dress and vivacity, but that once we hit a certain threshold, it does not allow us to Redefine it anymore as it holds our Fate in its unpredictable hands.

My Mother, who was almost 90 when she passed away ten years ago, and during her last few months of life asked me to organize her closet, saying: I like things to be neat before I go. I was in denial at that point, and thought that she would recover from her “chest infection” as the doctor told me, so I responded: you’re not going anywhere yet, Mama. On other occasions and coming back from her doctor’s office, or the hospital, she would be tired and weak, but still managed to see a speck of lint on the carpet and bend down to pick it up! It was very important to her that everything looked impeccable at all times. And that’s why I, too, am a neat freak. After all, I had her for a role-model and I feel so lucky and grateful for this and for so many other things I learned from her! What I regret is not telling her my feelings while she was still alive. We, human beings, sometimes foolishly, sometimes arrogantly, believe that there will always be time for this occasion, or that apology, or all the other things we often leave unsaid, undone. The sad reality is that as we rush through our busy fast-paced life we often forget to be fully aware of, and living in the moment. And there is no Rewind Button!

Last week, I was flipping the calendar page on my kitchen board to October and it hit me how quickly this year has passed. And, it goes faster between October and end of December what with all the Holidays, get togethers, decorations, menu planning and . . . and . . . my end-of-year Swiffer ritual days have begun when I go over all my documents and files to check that everything is proper and in order; bring out my winter clothes and pack up the ones for the Goodwill store that I won’t be wearing anymore, while joyfully celebrating that I seem to need less and less as time goes by; check out all my kitchen closets, pantry, freezer etc. and rearrange and sort out; check the expiration dates on my OTC (Over The Counter) medications and . . . and . . . It is a ritual that I truly enjoy, though as I was looking at the expiration date on my passport, and found that it was 2027, I remembered that when I had last renewed it I had thought to myself: that’s probably the last time I’ll be doing this. There are more and more things that I realize must be close to the “last time that I might be doing this.” It’s a reality that generally does not perturb my pragmatism, but occasionally makes me wistful.

At 76, I still feel young enough, continue doing my walking exercises, I don’t quite look my age (it’s because of my genes, not any rejuvenating hoaxes or Botox!) and I still look good in my tights, or my short skirts. Yes, I am one of those many lucky ones of my generation who seems to have Redefined Old. Until When? I don’t know. However, having arrived to this age, I savor and enjoy every day and every moment as I read my books – so many terrific ones! –  work on my crossword puzzles, watch my favorite shows cuddled up with my blanket, enjoy cooking my meals, talking to people when I go out, visiting with my “adopteds” (I have four precious daughters, adopted over forty years ago, though not legally), getting together with my Book Club buddies, enjoying lunch out with a friend, having coffee on my patio while watching the squirrels scampering about, and loving my wonderful children and, mostly, my priceless grandchildren. But then, of course, there are those incidents when I go to the kitchen and then stand there wondering: why did I come here? Or, opening my closet and asking myself: what was it that I wanted? Ah! Those Uninvited Senior (Alzheimer’s?) Moments that saunter in not heeding our “No Trespassing” signs! They are only a part of that whole Aging Package! Nevertheless, my motto nowadays (and I so regret not adopting that much earlier on although poets, philosophers, writers and wise people have been saying it throughout history) is: Carpe Diem (Seize the Day) and Que Sera Sera . . . because, as I tell my friends, there is no such thing as Forever . . . on Anything . . . so none of us is Exempt neither from Old Age no matter how we Deny, Define, or Redefine it, or from Expiring. Such is Life, its Good Times as well as its Sad and Bad, and those Sad and Bad days in our world today are far too many, way too dramatic, beyond heartbreaking, frustrating and infuriating as we are being led by a bunch of arrogant narcissists who have learned nothing from our ignoble murderous history. Therefore, grabbing and treasuring every Good moment becomes even more imperative! Carpe Diem!