Around the end of every year, and amongst all the little rituals that I have devised for that occasion, I bring out what little is remaining of all those photos that I once had. As I told a friend recently: I do this because should I lose my faculties at some point, I wouldn’t remember all those people, or occasions, so I might as well enjoy looking at them while I still do remember. Also, what’s the point of having photos if one isn’t going to look at them now and then? Just holding onto them as they sit in their albums, envelopes, boxes, drawers, or in the attic isn’t why we have them to begin with, is it? Moreover, a nostalgic trip down memory lane re-roots me and reaffirms where I came from, the experiences I lived through and cements what I have become today. It is a very enjoyable and humbling exercise!

Among the photos that I have kept over the years are those of my parents, my own childhood and growing up years, my wedding album, and a few other pictures that I simply could not part with. I left instructions for my kids that after I’m gone, they should keep of those pictures what is meaningful to them and shred the rest. Perhaps they might store the ones they picked with their own baby and childhood albums which I gave each of them as soon as they had their own homes – albums that I had worked so hard on. Or, maybe, as is fashionable these days, they might even digitize them and store them on their phones, computers and in the Cloud. There could also be a newer invention for such things somewhere in the near future that they might avail themselves of. With technology changing as fast as it is, who knows what could be in store tomorrow? For instance, only recently I was reminded that the transistor radio is fifty years old, and that Steve Jobs came out with the iPhone only ten years ago! And look where we are today! It is fascinating! Also, scary in a way as to how fast it all happened.

I was barely nineteen when I started working at a women’s magazine in Beirut, Al-Hasna’a (The Beautiful) and was put in charge of the Archives. The magazine had been newly launched and yet, the archive cabinet was bulging with files – photos taking the largest part of that trove. I can only imagine then how many archive cabinets they accumulated over the years. Phew! And this was a little magazine in tiny Beirut. Think for a moment of all the photograph archives contained within all the newspapers of the world; all the universities and academies; within the movie-production houses across the planet; at all museums and on and on. Should there be a way of amassing all those caches they would probably occupy many mountains and oceans!

However, today, I am talking about home photos in each of our private collections. Where are yours? How do you preserve them? What do you do with them? And, more importantly, if you are around my old age, what do you envision will happen to them once you’re gone? Let’s begin by saying that most of us ordinary human beings do not have photos that the rest of the world would be interested in viewing, right? They are primarily in our possession for our own little families; for our memories; for our own history. That makes them very important to us. Moreover, for those of us who have children and grandchildren wouldn’t they be important to them too, especially after we’re gone?

In 2014, Mona Halaby, another smart Palestinian woman started a Facebook archive titled: British Mandate Jerusalemites Photo Library. I have a link for it on this website’s home page. The collection has expanded over the years and is an absolute treasure and a testimony to our existence. I have sent photographs from my private albums to add to that fantastic collection. The reason I mention this is because sometimes our personal collections might be useful to a museum, a historical account, or other uses. For instance, the walls at Maggiano’s Restaurants are full of those beautiful old, black and white pictures from the twenties, thirties and such that depict lovely and nostalgic images. I was at a tiny restaurant in New York once that also had old photos of the Frank Sinatra era all over it’s walls. Fascinating! Maybe we could preserve some of our photos for use by a family member for such a purpose, or for contributing them to an organization, or entity that might be interested in pictures from a certain era. However, for most of us, they are simply a private possession.

So, let’s get to it and organize our photographs in such a way that our heirs would not have to fret and sweat over what to do with them. If you tell me you don’t have time, I have news for you: You probably never will! So do it now! I promise you, if for nothing else, it would be a nostalgic trip down memory lane.

Here are two pictures that I will share with you. The first one is from my first decade of life, the second one was taken in my seventh decade, just a few months before my Mama Habibti passed away. In between there was a lifetime of memories, tears, experiences, ups, downs, myriad emotions – especially for those who have passed on – heartache and joy. Photos should not simply be stashed away and forgotten. They are to be enjoyed, at least once a year. Yes? 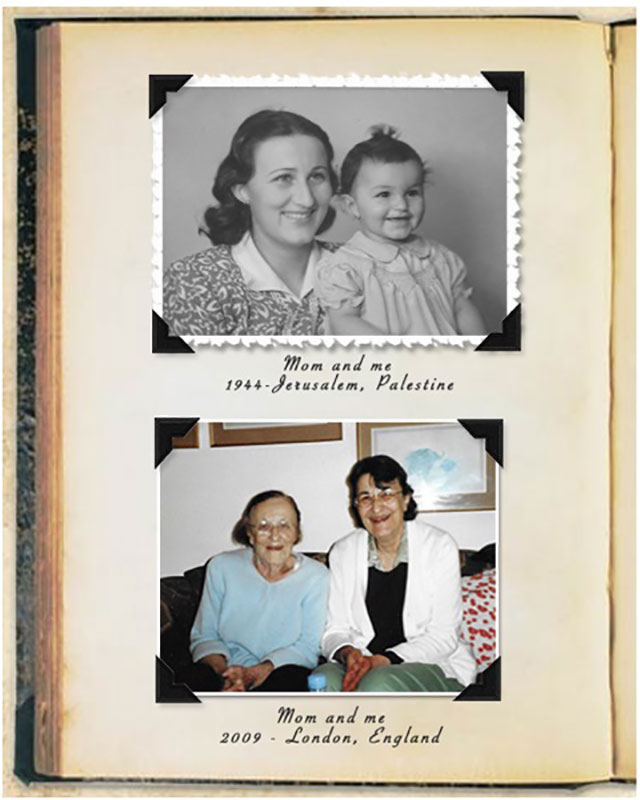